Schoolchildren in the lower grades spend a lot of time learning that our number system is a place value system based on ten and powers of ten. A daily activity in the second-grade classroom in which I student taught was counting ten small “ones blocks” and replacing them with one larger ten block. Students eventually also worked with hundreds blocks, learning that ten tens could be replaced with one hundred block.

While a base ten number system like ours has some disadvantages—it has difficulty representing the fraction one-third, for example—its real strength is in the facility with which one can multiply and divide by ten, or any power of ten.

Empowering students with the ability to easily multiply and divide numbers by ten or other powers of ten is one of the most important ways I as a tutor can help students. Some students are able to grasp this concept immediately or already have mastered it, whereas some students take a bit longer, yet once they do learn this skill, their learning goes faster and their thinking becomes more flexible. Here are some of the shortcuts I emphasize:

Learning about place value-based number doesn’t or shouldn’t stop with the early grades. Understanding decimal numbers requires a deep understanding of place value. But, really, decimal numbers are not all that different from whole numbers, at least in this respect: each place is worth ten times the place of the numeral to the right, and one tenth the value of the numeral to the left. One whole is equal to ten tenths; one tenth equals ten hundredths; one hundredth equals ten thousandths; and so on. By the end of the sixth grade students are expected to have mastered decimal numbers.

Students are introduced to scientific notation in the eighth grade, in which numbers are literally expressed as a power of ten (not using place value), a system that makes it easy to express very large or very small numbers. For example, the number 7 hundred millionths, which would take several digits to express

What is your child’s understanding of our decimal and place value-based number system? Have a conversation soon.

View all posts by janetplanetjs 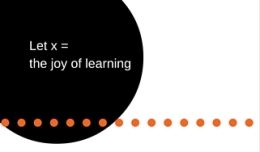